Most grant proposals are lucky to include two or three letters of support. But when the City of Yelm, in collaboration with ForeverGreen Trails, applied for funding to extend the Yelm Prairie Line Regional Trail (YPLT) across the Nisqually River and into Pierce County, 23 other organizations, including nonprofits, community groups, county commissioners and other cities in both Pierce and Thurston Counties wrote to endorse the project. 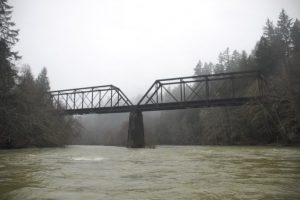 The Yelm Prairie Line Trail will be the only one in the state crossing the Nisqually River, making the project both more challenging and of greater regional significance.
Photo credit: Thomas O’Keefe

It’s a reflection of the trail’s regional importance, which goes well beyond the cities of Yelm or Roy. The ultimate goal is to connect to a vast trail network that will allow users to travel across the state. “Eventually you’ll be able to get all the way to Eastern Washington from Teninoor Olympia, or even to the Willapa Hills Trail by Chehalis and out to the coast” says City of Yelm Community Development Director Grant Beck. “We’re the only link over the Nisqually River, so that has statewide significance.”

Historically, the Prairie Line railroad spanned from Kalama to downtown Tacoma. In 2000, the City of Yelm purchased a 4.8-mile section of the right-of-way extending from Yelm into Pierce County near the City of Roy. In 2009, Yelm developed a 1.3-mile portion of non-motorized trail that linked over 45 miles of trail network within Thurston County.

Getting the trail over the river is Phase II of the project, one that’s included in an updated version of the City of Yelm’s Parks and Recreation Plan, part of the overall Comprehensive Plan. “All of that work was centered in Yelm and Thurston County,” says Anne Wahrmund, a member of the Yelm Planning Commission and the vice-chair of the Parks and Recreation Advisory Committee. “As we made more progress and started looking at moving the trail across the river, it became clear that we needed to coordinate with efforts going on in Pierce County.”

Enter Larry Leveen, project and communications coordinator for ForeverGreen Trails, a Pierce County nonprofit focused on policy, advocacy, education and promotion of trails. “Our vision is to connect all of our communities and key destinations with a network of trails,” he explains. “We also include sidewalks and bike lanes and facilities necessary to get to those trails.” 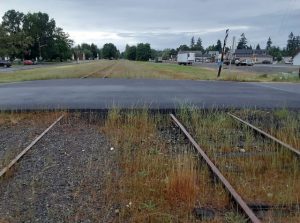 Leveen had been aware of the potential YPLT for years but on the Pierce County end, it lacked a champion. “No one was really pushing it forward,” he says. “It’s a challenging project because it not only crosses county borders, it goes over a river and a hydropower canal to do so. The more complicated a project is, the greater the need for coordination and information sharing and there was no entity on this end leading that effort.”

With encouragement from a board member who is active in the Tacoma WA Bike Club, Leveen began establishing a coalition of groups with potential stakes in the trail, including elected officials in the second legislative district, Pierce County Council members, and congressional representatives. “We explained the impacts and the benefits and got them to write letters and pass legislation in support of the project,” says Leveen.

He also pursued funding, first through helping the City of Roy apply for a grant through the Puget Sound Regional Council. The coalition raised over $7,000 to supply a local match to leverage a $45,000 grant to support planning efforts. The group obtained additional support through the National Park Service’s Rivers, Trails and Community Assistanceprogram for a pre-planning process.

In the meantime, the City of Yelm conducted a structural analysis of one of the most challenging aspects of the project: the bridge crossing the Nisqually River. “We had an engineer out to take a look at it because we hadn’t had any information on it since the early 2000s,” says Beck. “We were happy to learn that other than some deferred maintenance and painting, it’s in really good shape for pedestrian access and bicycles. Even better, the cost was almost exactly what we had estimated.” 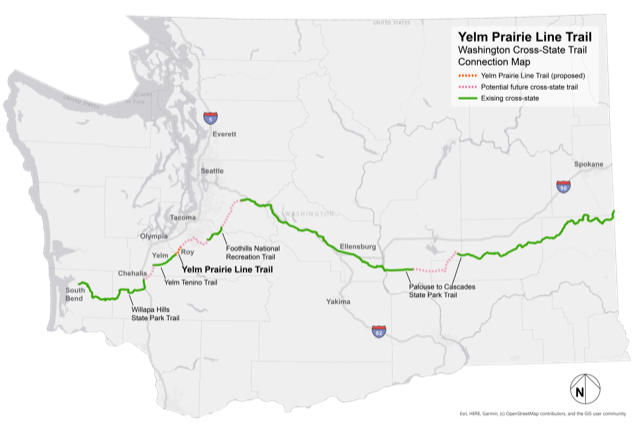 The goal is to eventually connect the YPLT to a statewide network of trails that will allow users to travel from Tenino to Spokane or other regions within the state.
Photo credit: ForeverGreen Trails

The city will know whether or not their grant application for Phase II funding has been approved by the state Recreation and Conservation Office (RCO) after a final presentation in late September. If so, they’ll begin looking for partners to match funds through in-kind contributions. It will take several years to finish the third phase of the trail, which lies entirely within Pierce County. That project, known as the Yelm Prairie Line Trail Partnership in Pierce County’s long-range Parks, Recreation and Open Space (PROS) Plan, is now slated for design in 2024 and construction in 2026, and identifies some of the local funding for it. “Getting that project elevated in the recent PROS plan update was an important milestone for us,” says Leveen. “It shows partners and funders that there is real commitment and coordination on both sides of the river.” In two years, Pierce County will update its Regional Trails Plan to designate how the YPLT will connect to the rest of its countywide trail network, and on to King County as well. 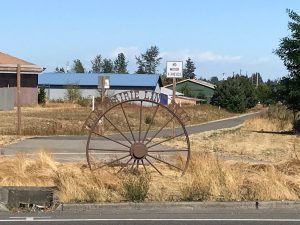 Recreation enthusiasts from around the Puget Sound area already enjoy the first section of the Prairie Line Trail, which links with the Yelm-Tenino trail.
Photo credit: Anne Wahrmund

Once complete, the trail will provide an economic boost for surrounding communities, including Yelm and Roy. “There are a lot of people who come down from Pierce County and even King County to Yelm to get onto our existing trail system,” says Beck. “By giving more access and getting more people on those trails, we’re doing good things economically, especially for the downtown core.”

Wahrmund sees another benefit. “In the parts of the trail we’ve already completed, we’re seeing new users that we hadn’t initially expected,” she says. “People are coming from their homes and getting outside during the pandemic. Young families, some pushing strollers, are enjoying the trail. We’ve been seeing a broader usage than we anticipated by people of all ages, and the trail is a unifying force. It makes people feel like they’re part of the community.”

Learn more about the Yelm Prairie Line Trail or visit the City of Yelm’s website.