In the Public Works Department world, the City of Yelm’s Water Reclamation Facility (WRF) is a unicorn. When a Washington State Department of Ecology (DOE) inspector toured the facility recently, he gave it a perfect review with no recommended corrections, an almost unheard of event. “Everything is in order,” he told Treatment Plant Manager Bill Van Buskirk. “This is the best inspection I’ve had lately.” 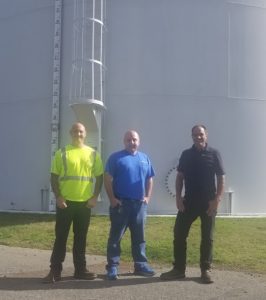 Van Buskirk has been with the city for four years, first as a wastewater manager. When Director of Public Works Cody Colt came on board in May 2020, one of his first actions was promoting Van Buskirk to his current role. Colt credits Van Buskirk with improving efficiency and reducing costs.

“Bill and his team started a whole revitalization effort for the plant,” says Colt. “They’ve gone out in their free time to paint, fix valves and take care of issues that haven’t been resolved in years. The amount of money we’ve saved because of what they’ve done through basic maintenance and replacing valves is astronomical.”

Those savings will be passed on to consumers through lower water rates. First, a projected rate hike to pay for maintenance of the WRF will now be unnecessary. “We’re spending between $200,000 to $300,000 less than we expected and that prevents ratepayers from having to bear that burden,” says Colt. “Next year we can keep the rate at exactly the same as it is now.”  Next, in the coming year, the WRF is scheduled for an expensive upgrade, but now the savings can be applied toward those costs rather than passed on to consumers. Colt anticipates that water utility rates will go down next year rather than up.

The excellent DOE review is particularly satisfying because it represents a departure from previous inspections. “There have been glaring issues in the past, which is part of the reason the rates were raised,” says Van Buskirk. “Ecology told us they’d been out here several times and had never seen the plant looking this good or running this effectively.” 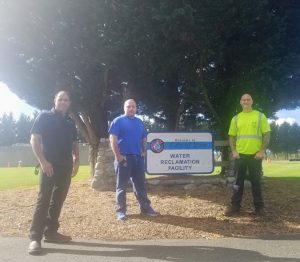 Pending approval from the city council and multiple permits through the Department of Ecology, the next step for the WRF will be an overhaul that allows for high-tech processing of solid and liquid waste. “It’s going to require a complete rebuilding of the plant,” says Public Works and Project Manager Patrick Hughes. “The plan is to start construction next summer.”

Once complete, the renovated WRF will create Class A biosolids that no longer need to be transported to Shelton for disposal and can be given away or sold to local schools and community groups as fertilizer, creating further cost savings and a revenue stream for the city. In October, the department submitted a proposal for a $24 million grant to the DOE to help fund the remodel. 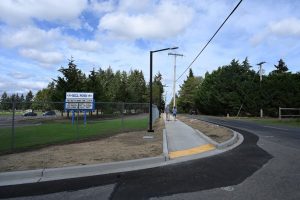 The area near the elementary school typically sees heavy traffic from both pedestrians and parents picking up their children from school.
Photo courtesy: City of Yelm

Aside from the WRF, the Public Works Department has been making progress with multiple projects in the past year, with more scheduled in the coming months. Recently they completed a sidewalk along Mill Road, near Mill Pond Elementary School, with a new curb, fence and streetlights installed to make the area safer for pedestrians. The crew also performed several drainage modifications at Longmire Park during the summer. “We had a lot of problems with standing water and soft, spongy areas on two of the fields,” says Hughes.

Two major upcoming projects involve popular local landmarks. During the winters of 2020-21 and 2021-22, the crew plan to modify several features of Cochrane Park, which doubles as the primary outfall for reclaimed water from the WRF. Cleaning up the park’s fountain, removing trees and landscaping will all occur this winter. “We’re going to realign and reconfigure the first pond where the water comes into the park,” says Hughes.

Starting next year, visitors will enjoy a newly installed restroom, a pre-manufactured building that will arrive ready to be hooked up for utilities. Special bonus: the water that goes into the toilets will end up being recycled back to the restroom after going through the filtration process at the WRF.  “As far as I could find out,” says Colt, “we’ll have the only restrooms in Western Washington where the toilets are using reclaimed water.” 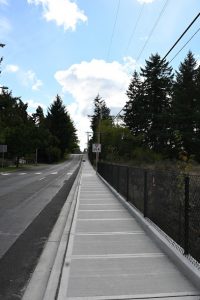 The following winter, the department will perform the remainder of the modifications, increasing the size of several rapid infiltration basins, cleaning out the remaining ponds and changing the configuration on some of the piping. “While it’s essentially going to remain the same, we’ll have the capacity for an increased amount of flow,” says Hughes. “We’re still trying to determine how much more we’re going to be able to send to Cochrane Park.”

Another key project affects the Tahoma Valley Golf Course & Country Club. Mosman Road, which currently ends at the popular golf course and restaurant, will extend through the course itself and connect with Longmire Street. “We’re in the process of acquiring the land needed to put that road through,” says Hughes.

The Public Works Department was one of only two City of Yelm departments that stayed fully operational during the COVID-19 shutdown. Regardless of what happens as we head into 2021, their work will continue.