Whenever it occurs, during the next Nisqually Party with a Purpose Pub Crawl in Yelm participants will have the benefit of beautiful wide sidewalks to help them traverse between watering holes. COVID-19 may have stopped events like the popular fundraiser from happening (for now) but it hasn’t kept the City of Yelmfrom moving forward on its vision of safe, walkable neighborhoods. Over the past year, several key projects have been completed, others are in process and still more are in the preparatory phase.

The process began with the Community Development Department identifying priorities as part of its comprehensive plan. Those were then incorporated into a Capital Improvement Plan related to long-range transportation. In 2019, the city evaluated the condition of its sidewalks and created a program to provide repair and maintenance along with a plan to build wider sidewalks that would increase walkability and access for different modes of recreation such as walking, jogging and bicycling while remaining accessible for people of all abilities.

One of the first projects was sidewalk and pavement repairs and improvements in the downtown core between 2nd and 4th streets, a section of town that includes frequently visited businesses like Gordon’s Garden Center, Prairie Lanes Bowling Alley, the Yelm Food Co-op and Pizzeria La Gitana.

“We’ve increased the width of the sidewalks and we’ve also repaired or replaced a number of those that were aging and no longer level,” says Patrick Hughes, the City’s Public Works project manager. “The biggest benefits to the community are pedestrian mobility and aesthetics.” Work on that section of town will be ongoing, with funding supplied through the city’s Road and Street Construction Fund. Civil Engineer Derek McCoy served as project manager. 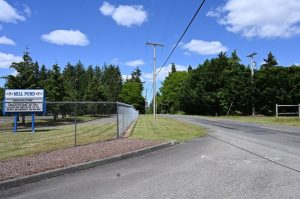 Another project recently completed at almost no cost to the city happened near Mill Pond Elementary School. A $300,000 grant from the Transportation Improvement Board was supplemented by Yelm Community Schools to extend the sidewalk along the west side of Mill Road between 104th Ave and 107th Loop SE, with a goal of increasing safety for students and pedestrians. “It was basically a path through a meadow along a road where car speeds are generally higher than they need to be,” says Hughes. “It was a dangerous area, and in addition to that, it was dark. We’ve upgraded it with a new sidewalk, an integral curb, new street lighting and a retaining wall to level it out. It’s going to be much safer.” Chehalis-based firm Barcott Construction was awarded the bid for the Mill Road Sidewalk project.  Construction is expected to be complete by mid-August.

Near the Yelm Chamber of Commerce and across the street at Walt’s Point S Tire Shop, the Public Works Department also patched up cracks and bumps in the sidewalk, using funds from the city’s Road and Street Maintenance – Sidewalk Repair and Maintenance Fund. The entire cost was less than $5,000. 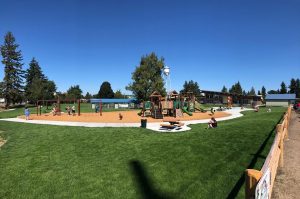 Sadly in light of the restrictions imposed due to COVID-19, one key part of the walkable communities plan is not currently in use: the improvements to Yelm City Park, including the 1,780-square-foot Splash Park. “Unfortunately, we haven’t been able to open it this year, but we got rave reviews from the community on that new addition,” says Hughes. “People told us it was a huge improvement to the city park. The majority of the comments from the community on all these projects have been overwhelmingly positive.”

Coming up, plans are in the works to extend Mosman Avenue SW to Longmire Street SE near the Tahoma Valley Golf Course. “It’s actually going to traverse a portion of the existing golf course,” says Hughes. “I’ve already secured two of the three grants that are going be necessary for construction. Construction could be underway by next spring.” 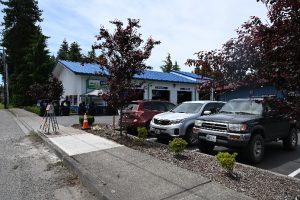 While popular events that would showcase the improvements are on hold for this year, including Yelm Jazz in the Park, the Nisqually Valley Barbecue Rally, and Yelm Prairie Days, they will eventually return. When they do, thousands of people at once will get to enjoy the city’s newly walkable neighborhoods and visit local businesses along the way. That is a day we can all look forward to.