Each year, the City of Yelm spends approximately $550,000 hauling leftover waste and septage from its Water Reclamation Facility (WRF) facility to Shelton where it’s turned into fertilizer. Aside from the expense to the city, the transportation process takes a toll on the environment by putting more trucks on the road and increases the likelihood of a spill in the event of an accident. But now the Public Works Department has come up with a solution that will cut costs and generate revenue: building a biodryer at the onsite as part of the overhaul of the city’s 26-year-old facility to a state-of-the-art system. 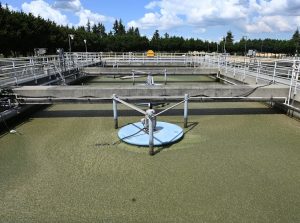 When Public Works Director Cody Colt looked into how much that would cost, he discovered that building the mechanism sooner would save the city more money than waiting until Phase III of a multi-year plan, as was originally proposed. The total cost of the biodryer and septage receiving station is $2 million. “It will pay for itself in two years,” says Colt. “It made sense to accelerate the purchasing process because the return on investment was a lot quicker if we acted now.” Pending approval by the city council, the biodryer may be installed by the end of 2021.

The city has multiple reasons for the upgrade, including age, capacity as the region continues to grow and the need to meet increasingly stringent industry standards. The process began in 2018 when the city replaced the Reclaimed Water Pump Station (RWPS) and increased the capacity of the water distribution system to meet growing demand. The pump station takes effluent from the WRF and distributes it to various sites around the city. “The pump station was really falling apart,” says Public Works Project Manager Pat Hughes.

At the same time, the department updated the SCADA (Supervisory Control and Data Acquisition) computer system, which remotely controls and monitors the entire water and sewer complex. “We’re able to see the whole system on two big monitors that tell us about water tank levels, which pumps are on and which valves are open,” says Hughes.

In Phase II, the original plan was to upgrade how liquid waste is treated. “Aside from the fact that the facility is aging and has components that are well beyond their service life, we’re planning for a significant amount of future growth,” says Hughes. “We’re changing the method of how we transform water from raw sewage to Class A reclaimed water.” 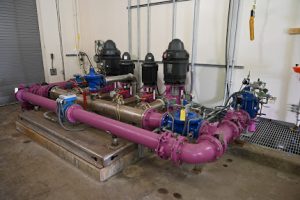 Phase One of the upgrade involved replacing the Reclaimed Water Pump Station and upgrading the SCADA computer system.

For solid waste, there’s the biodryer. The machine uses extreme heat to remove moisture from a waste stream and gradually turn it into a form of biosolid that can be used as fertilizer. Having the biodryer in place would both save money currently spent on transporting waste and potentially generate revenue for the city by creating fertilizer that could be sold. “Right now, we have this water that we’re reusing, and the solids are getting trucked to Shelton,” Colt explains. “We’re spending quite a bit of money on that. But if we can produce a product ourselves that can be used as a Class A biosolid, a lot of people here can use it as fertilizer. We’ve taken a cost and turned it into a revenue stream, and now we’re providing a service as well. We’re also taking those trucks off the road.”

The Yelm City Council had already approved the original design plans for the WRF in April 2020. The updated version of the plans with the biodryer added to the budget was approved by council in July 2020. In the meantime, the council is exploring ways to pay for the costs associated with rebuilding the WRF, which total $25 million. The new facility is expected to last until 2045 and be significantly less expensive to upgrade.

If all goes according to plan, the biodryer will be installed by the end of next year. Colt says accelerating the process was ultimately more cost-effective. Seattle-based Parametrix Engineering is designing the WRF renovations and it made sense to have them simultaneously design the biodryer. “If we did this in a few years, we’d have to pay for a whole new group to come in,” says Colt. “By including it now we can save on construction costs. We’re talking about at least $1 million in savings by having everything grouped together versus pushing it down the road.”